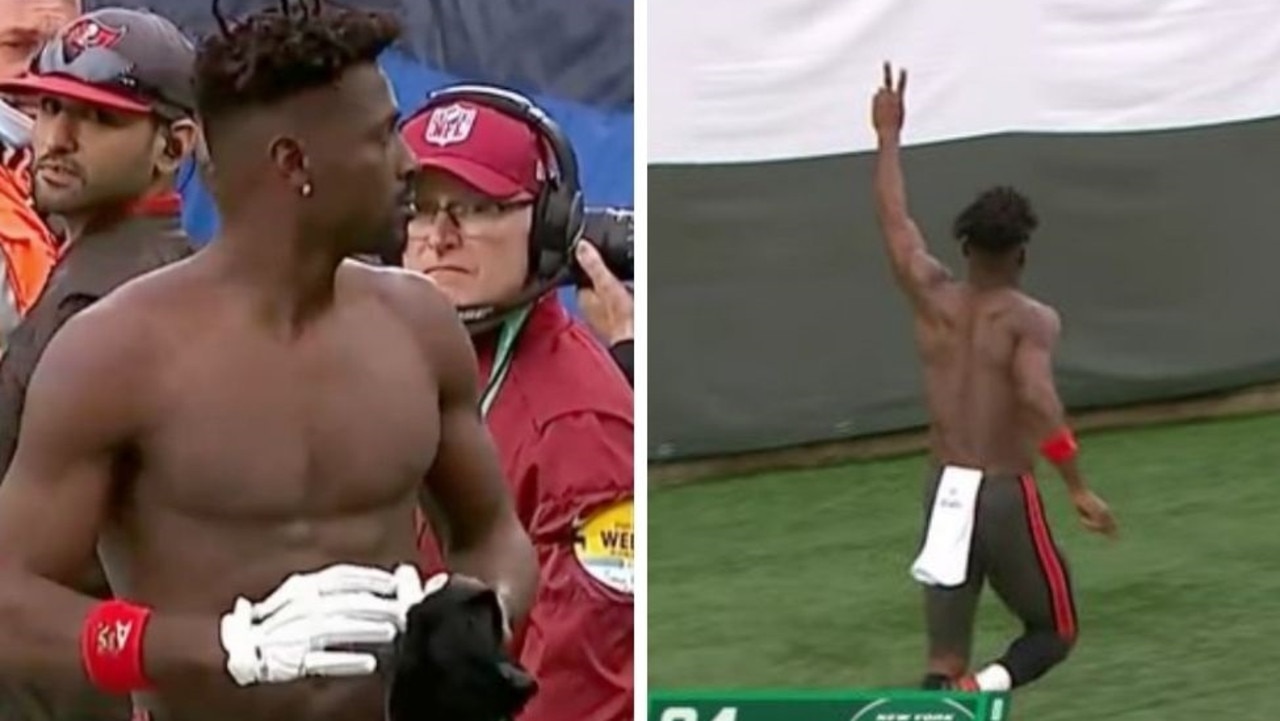 American viewers couldn’t believe what they were seeing when an NFL star synonymous with controversy stripped off and quit mid-game.

Antonio Brown has thrown his career away after the Tampa Bay star stole the show for the wrong reasons on Monday.

The Buccaneers were down 24-10 in the third quarter against the New York Jets when out of nowhere, Brown took off his pads and jersey, threw an undershirt and gloves into the stands then ran across the field when both teams were still out there.

Watch Live NFL every Monday, Tuesday and Friday with ESPN on Kayo. 6 live games every week + every game of the Post-Season. New to Kayo? Start Your Free Trial >

The wide receiver waved and rocked a “peace” sign to the crowd then headed to the locker room, ignoring the pleas of teammates to remain on deck.

Tampa Bay coach Bruce Arians said after the game Brown is “no longer a Buc” — effectively confirming he had been sacked.

“That is the story,” Arians added. “I’m no longer talking about him.”

Reporter Dov Kleiman tweeted: “Antonio Brown can’t return to the team after this. Tom Brady fought for this guy to be able to revive his career and this is how he rewards him?”

Jordan Cicchelli wrote: “What in the flying hell is Antonio Brown doing.”

Ex-footballer Patrick Doody added: “I have never seen anything like what I just saw with Antonio Brown.”

However, among the shock was genuine concern for Brown, with many suggesting he has mental health issues that need addressing.

Brown is no stranger to controversy. In 2019 he was cut by New England after just 11 days and one game for the franchise because of sexual assault allegations against him.

That came after he was released by the Oakland Raiders without playing a single game for the team — a short stint marred by an altercation with general manager Mike Maycock that saw him fined more than $200,000.

Late last year Brown was suspended for lying about his vaccination status after an investigation was launched following allegations he paid for fake vaccine cards.

The Buccaneers opted to keep Brown on their books but after Arians’ one-liner, that’s no longer the case.