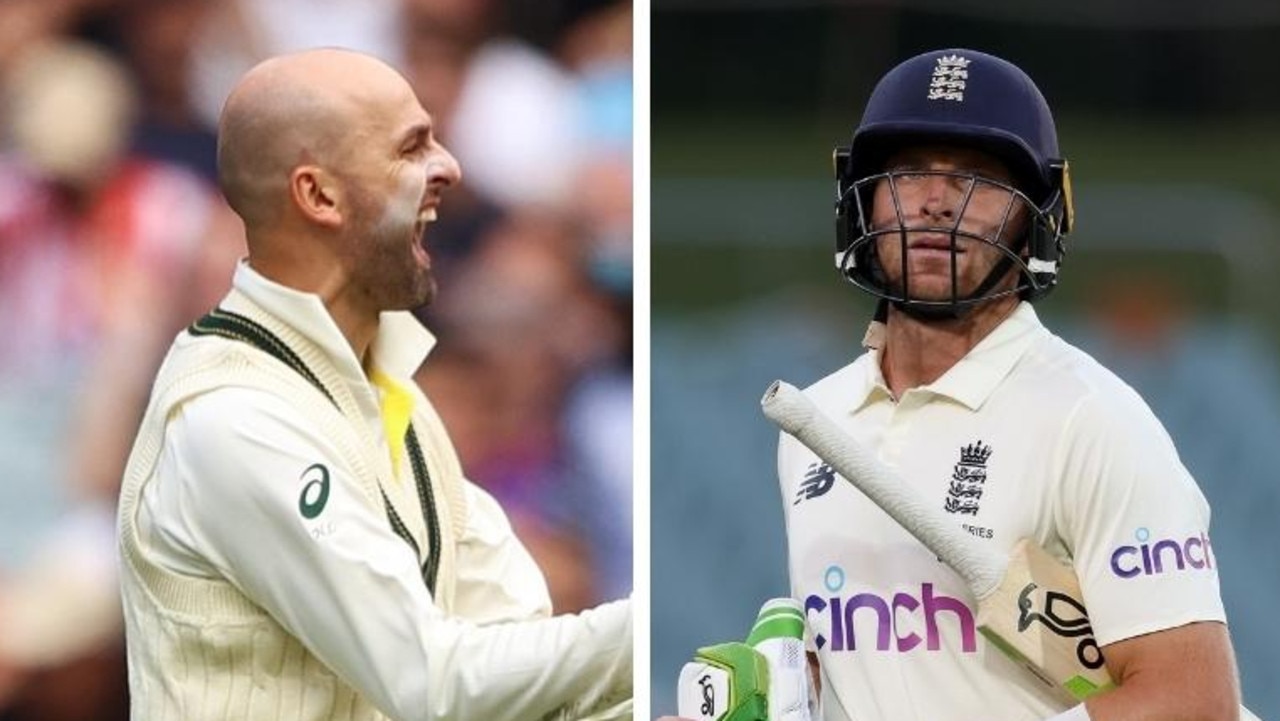 England’s horror tour has continued, with their top-order once again capitulating on day one of the Boxing Day Test at the MCG.

Welcome to news.com.au’s live blog of Day 1 of the Boxing Day Test from the MCG.

After dismissing under-fire England opener Haseeb Hameed in his first over of the Test, Cummins knocked over Zak Crawley and Dawid Malan before the lunch interval.

And the side’s middle-order couldn’t resurrect the innings, with Ben Stokes and Jos Buttler both back in the sheds cheaply before tea.

Day one started 30 minutes later than scheduled on Sunday due to some light rain in the morning.

Scott Boland has his first Test wicket, albeit in somewhat controversial circumstances.

The Victorian paceman trapped England’s Mark Wood on the front pad, and after a lengthy appeal, umpire Paul Reiffel awarded the wicket.

Wood called for the review, and replays suggested the ball made contact with the bat and pad almost simultaneously.

However, the third umpire gave benefit of the doubt to the bowler, and Hawkeye showed that the Kookaburra would have crashed into middle and leg.

Wood was gone for 6, and England are now seven wickets down at the MCG.

This is honestly woeful from England’s batters.

Jos Buttler has thrown his wicket away at the MCG, charging down the pitch and looking to swat Nathan Lyon over the mid-wicket boundary.

But the England gloveman instead clipped it directly towards Scott Boland at deep square leg, who claims his first catch in Test cricket.

“He knew as soon as he played that shot that he had done something silly just before tea,” former Australian batter Michael Hussey said on Fox Cricket. “That’s just a killer blow for England.”

Former Australian opener Simon Katich told SEN: “I’m still gobsmacked. That was England’s last real hope of a substantial partnership. It speaks of the mindset in that dressing room.”

England lost three wickets in that afternoon session, all of which came from terrible shots.

Radio presenter Quentin Hull tweeted: “Shot selection for the past two wickets, from players who should know better, has been really poor. Rudimentary skill elements of Test match concentration has been really disappointing from England batting in this series.”

Stokes back in the sheds

What an ugly shot from Ben Stokes.

Aussie young gun Cameron Green bowled short of a good length, and the England all-rounder looked to ramp the delivery over the slip cordon towards third man.

But Stokes only managed to scoop the Kookaburra directly towards Nathan Lyon at point.

“I think he got caught between trying to go over the top of the slips with it and then ended, it perhaps followed him a bit, got tighter on him and he was cramped for space. Massive wicket.”

Stokes has been dismissed for 25, and England wicketkeeper Jos Buttler is the new man in the middle.

Yet another fifty for Root

England captain Joe Root has brought up a classy half-century, his ninth Test fifty on Australian soil, but he didn’t last long at the crease after passing the minor milestone.

On the final ball of the 33rd over, Root needlessly swatted at a short and wide delivery from Mitchell Starc, with the edge flying through to gloveman Alex Carey.

Root was furious with himself as he walked back to the sheds – he has yet again botched an opportunity to reach triple figures on Australian soil.

The 30-year-old has equalled the all-time record for most Test fifties in Australia without scoring a century.

“You can see the disappointment in his reaction.”

Jonny Bairstow is the new player in the middle, joining Ben Stokes.

Just as England fans would have been thinking of a potential fightback, Pat Cummins gets another one.

England skipper Joe Root and No. 3 Dawid Malan had combined for a 48-run partnership before the Australian captain found the outside edge of Malan’s bat on what was ultimately the final delivery before lunch. with David Warner took a classy catch at first slip.

“That is a huge wicket. Superstar, Pat Cummins, provides again.”

It was England’s third wicket of the opening session, and Root will return in 40 minutes alongside all-rounder Ben Stokes.

Australian captain Pat Cummins struck in his first over at the MCG, removing under-fire England opener Haseeb Hameed for a duck.

Cummins got the Kookaburra to nip away off the deck, and the outside edge was caught by gloveman Alex Carey behind the stumps.

About half an hour later, Cummins struck again, dismissing the returning Zak Crawley for 12.

The Aussie skipper got the ball to seamer away from the right-hander just short of a good length, with the outside edge flying towards Cameron Green at gully.

Cummins has figures of 2/9 off four overs, and England are two down after half an hour of action.

Pat Cummins has the toss and Australia will bowl first at the MCG.

The MCG deck is green, the weather is overcast – conditions are perfect for swing bowling.

Cummins couldn’t hide his smile when the coin fell in his favour. England captain Joe Root says he would have made the same call.

‘Staggering’: England get it wrong again

Australia are a win away from winning back the Ashes and a draw away from retaining it but once again, England have got their selection all wrong.

Four players have been dropped from the Adelaide team as Zak Crawley, Jonny Bairstow, Mark Wood and Jack Leach were into the side for Rory Burns, Ollie Pope, Chris Woakes and Stuart Broad.

There is 11mm of grass on the MCG and Mike Hussey said he was expecting plenty of movement off the seam.

But ex-England skipper Michael Vaughan been left perplexed as Broad, a man with 526 wickets in 150 Test matches was once again left out of the side.

Broad was left out of the first Test side at the Gabba which had plenty of grass and movement, before being brought in for the Adelaide Test which had next to no movement, and will be again dropped for the MCG match where movement is expected.

Broad had the wood on David Warner in England under swinging and seaming conditions but has not been given the chance to shine in Australia.

“I look at someone like Stuart Broad, in Brisbane he wasn’t selected on that green top there, he’s not selected here,” Vaughan said on Fox Cricket’s Ashes Daily. “How England have not seen Stuart Broad, with all his experience, such a wonderful Test career, is not going to be bowling a ball on a green top in Brisbane and now not here in Melbourne, that’s staggering really.

“Those are the decisions you have to make in a management group. England will feel that they’ve got the team to try and compete.”

Vaughan said England’s priorities had been all over the shop.

In a year they focused on the white-ball game, Vaughan said England should have allowed the short forms carry on as they had, but had got that wrong too.

He pointed to the use of Leach and spin, saying Leach didn’t get to bowl a ball during the English summer after a good subcontinent tour.

Then Australia went after him in Brisbane on a green top, then didn’t get a run on a dry Adelaide pitch, before getting thrown back in for the MCG, where it’s cool, overcast and even had showers before play.

Asked later about England’s decision, Vaughan said: “So far the only thing they’ve done right is turn up on time. They’ve got pretty much everything wrong. Selection, tactics have not quite been right. You look at that first week and I look again here, Stuart Broad should be playing here. He should have played in Brisbane. How he’s not going to be bowling around the wicket to David Warner on a green top, I just can’t fathom that with the quality he brings.”