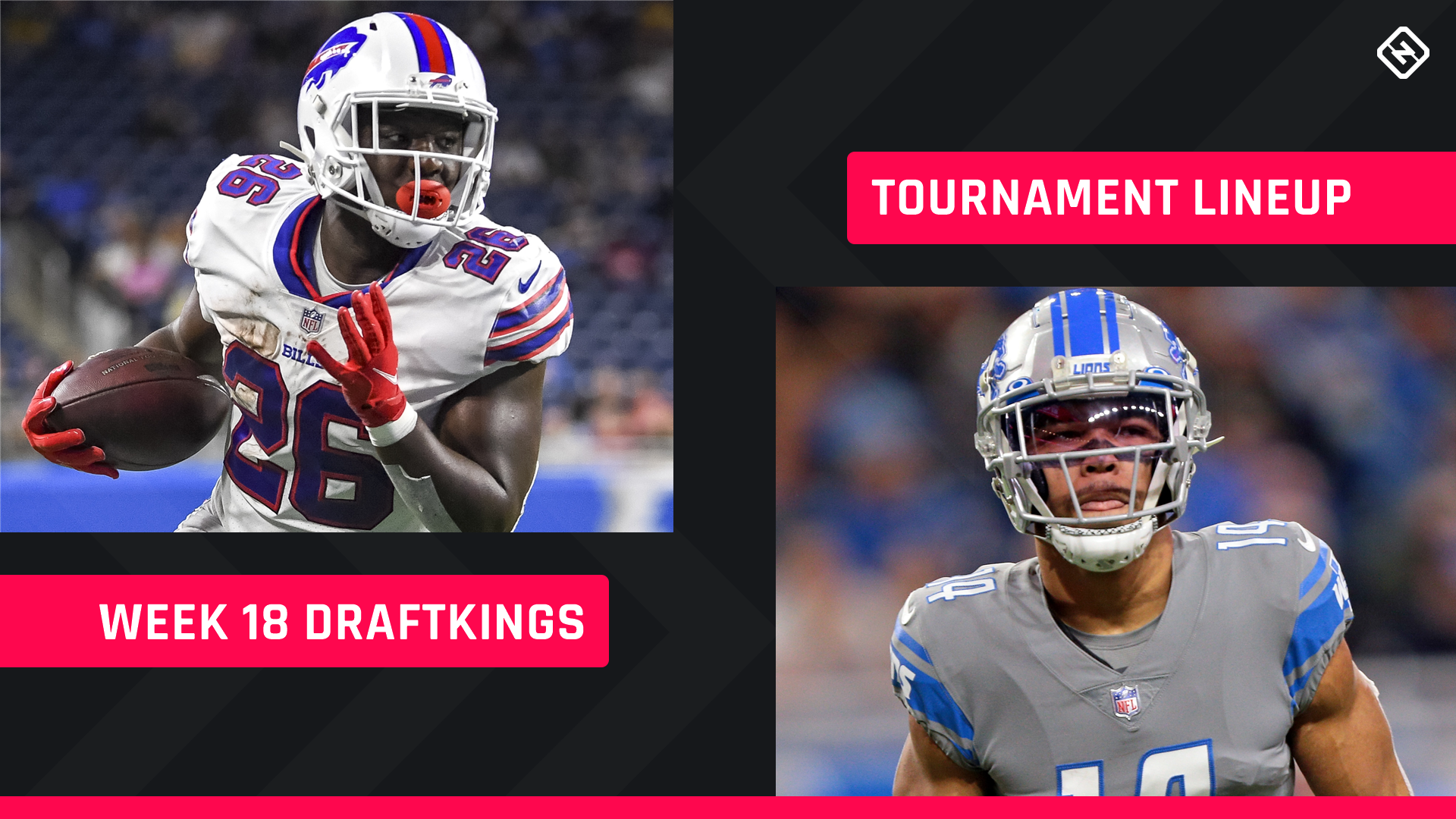 The first Week 18 in NFL history signals the end of the road for this season’s DFS main slates. Save for a couple of exceptions, we’ve prioritized players from teams with something still at stake in our Week 18 DraftKings Tournament Lineup. The last thing we want is for our picks to play one quarter of a game and leave us wondering what could’ve been with another few series worth of snaps. Obviously, we still have to identify some under-the-radar value for GPP tournaments, and we believe we have the right configuration to make some noise this week.

Before we break down our picks, here are the most notable scoring rules for DraftKings contests: Full-point PPR, four-point passing TDs,  three-point bonuses for 100 rushing yards, 100 receiving yards, and 300 passing yards.

QB Taysom Hill, Saints @ Falcons ($6,200). Hill’s dual-threat ability presents the type of upside we’re chasing. The Falcons narrowly defeated the Saints in Week 9, but we still like this matchup for New Orleans. The Saints still have a shot at the postseason, so we can assume that Hill will be under center for all four quarters.

RB Devin Singletary, Bills vs. Jets ($6,000). Singletary is in the midst of a productive run in which he’s scored increasingly more DraftKings points since Week 14’s 14.9 DK-point effort. Additionally, he’ll be facing off against a putrid Jets squad. The Bills opened as 17-point favorites, so the stage is set for a blowout — and perhaps another 20-plus-point display — this weekend.

RB Elijah Mitchell, 49ers @ Rams ($6,000). Injuries have been the only issue for Mitchell this season. The rookie continues to dominate volume when he’s healthy — he turned 23 touches into 130 total yards, a touchdown, and 24.0 DK points on Sunday. He’s gone over the 20.0 DK-point mark three times overall, and two more 19.0-plus-point efforts.

WR Amon-Ra St. Brown, Lions vs. Packers ($6,800). A matchup between the Lions and Packers heavily favors the latter, but it’s worth asking how many players Matt LaFleur and Co. will rest during this Week 18 finale. It’s quite possible the Lions will spend much of the game playing against second and third-string defenders. St. Brown has been balling in his own right though. He has five straight games of at least 11 targets and has collected 43 receptions over that span. He’s on too hot of a run to shy away now.

WR Michael Pittman Jr., Colts @ Jaguars ($5,900). We don’t love the Colts’ distribution of targets from game-to-game, but we do like picking on the Jaguars. Pittman has seen 18 targets over the last two weeks and has five games with double-digit chances. Some of those came during T.Y. Hilton’s absence, but Pittman has established himself as the team’s top wide receiver nonetheless. The Colts are in a must-win spot if they want to scratch their way into the postseason, and we expect them to lean on their best players.

WR Marquez Callaway, Saints @ Falcons ($5,000). Callaway has appeared to develop a strong bond with Taysom Hill. He’s collected 19 targets over the last two games and has caught 12 of those passes, good for a 63.2 percent catch rate — better than his full-season mark of 55.4 percent. If the two can maintain their sharp connection, Callaway’s big-play ability should be demonstrated against a very beatable Falcons team.

TE Pat Freiermuth, Steelers @ Ravens ($4,600). Freiermuth returned to action on Monday, and he’ll look to put an exclamation point on what has been a very solid rookie campaign. We don’t expect a ton of targets to flow his way, but Freiermuth has established himself as a red zone threat, and the Ravens have struggled to contain opposing tight ends this season.

FLEX (RB) Chase Edmonds, Cardinals vs. Seahawks ($5,800). James Conner’s absence certainly opened the door for Edmonds to be featured more prominently last week, but we’ve liked his involvement in the passing game all season. He’s received 15 targets over the last two games — catching 13 of them — and collected 34 carries as well. Edmonds should be fresh after missing time midseason, so it wouldn’t be a surprise to see him continue to receive healthy loads of volume.

DEF Football Team @ Giants ($3,100). This selection is all about picking on the Giants, who have been utterly atrocious on offense. They’ve scored more than 13 points once in the seven games since their bye, and as difficult as it may have been to imagine a few weeks ago, the play from the Giants’ backup quarterbacks has made fans appreciate Daniel Jones.