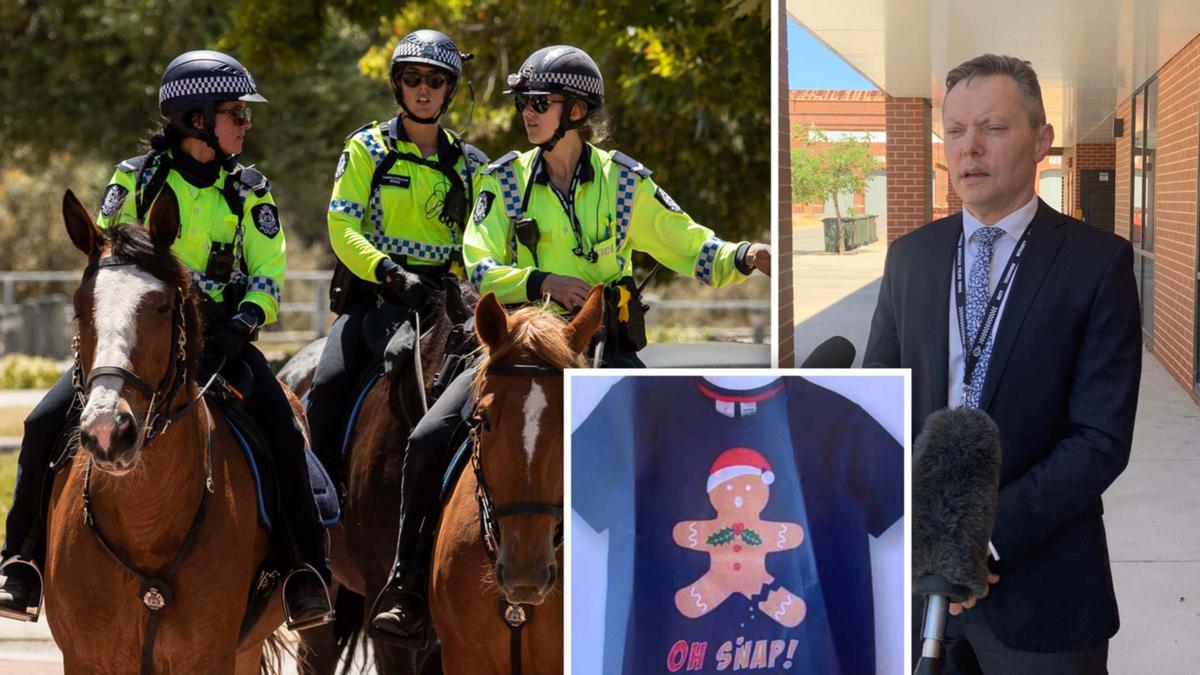 WA Police say they are throwing every resource necessary at the investigation into the heinous sexual assault of a little girl in Ellenbrook on Boxing Day evening.

The seven-year-old child went to sleep “as normal” at 8pm on December 26 and was in her own bed when the sickening attack unfolded in her family home.

Later that night, or early the following morning on December 27, a man was able to break into the house undetected.

Initial inquiries suggest he gained access by removing a white-coloured fly screen measuring 56cmx45cm from a window in another room in the house, before making his way to the child’s bedroom.

When he left, police believe he took the fly screen with him, as well as a navy-blue, short-sleeved pyjama top that belonged to his alleged victim.

Police are yet to confirm if she had been wearing the Christmas themed-T-shirt from Best & Less — emblazoned with a picture of a smiling gingerbread man — or if the man took it from her room or another part of the house.

Detective Inspector Hamish McKenzie called the horror as a “heinous”, ”brazen” incident, describing it as “disturbing in its very nature … and for any parent”.

It was 9am when the little girl got up and told her father that she had been sexually assaulted in the middle of the night.

Police were immediately called, with a team of forensic officers, child sex crime specialists, and local police and detectives arriving shortly after.

The girl was taken to Perth Children’s Hospital where she was seen to by medical staff, and interviewed by a specialist child interviewer. She remains there now.

“As you can expect the child is extremely distraught — as are the family,” Det Insp McKenzie said on Tuesday afternoon.

“They are in the best place for their health care, in the hospital.

“We’ve appointed the family liaison officer, but … of course our involvement with the family doesn’t stop now but it will continue well beyond this point of time.

Police are yet to identify any potential suspects, however, they confirmed the child’s attacker was a man and said they were keeping an open mind when asked whether she may have known him, or if he had been stalking her.

“The victim has been interviewed by a specialist child interviewer. There is some information in relation to a brief description of the suspect … (and) there was other information that we are currently working through,” Det Insp McKenzie said.

“We might have further information in relation to the identity or an identikit photo of the suspect if one becomes known.”

Det Insp McKenzie said the investigation was one of the top priorities of the WA Police Force and had been promised “every resource” necessary.

“This is a high profile investigation for the WA Police and this is a significant investigation for State Crime,” he said. “We have an unknown offender — at this stage — who’s committed a heinous sexual assault on a seven-year-old child. So that obviously brings it to a heightened state of investigative actions for us and we will continue for as long as we need to … to find the person responsible for this.”

A number of reportable sex offenders are in the area, with several already identified by police.

They are now working through the list as they work to eliminate those sex offenders from their investigation.

Police spent all of Monday at the victim’s home, with forensics scouring the home for clues that could lead them to her attacker.

On Tuesday the WA Police mounted section as well as drone operators were called to an area near the home, bordered by Tonkin Highway, The Broadway and The Promenade, to comb through the bushland for any sign of the flyscreen, pyjama top, or anything else of interest to the investigation.

Investigators would like to speak to anyone who has seen the child’s missing pyjama top or the flyscreen allegedly taken from the Ellenbrook home and anyone with dash cam or CCTV vision from this area between Sunday night and Monday morning.

Anyone with information is asked to contact Crime Stoppers on 1800 333 000 or online.