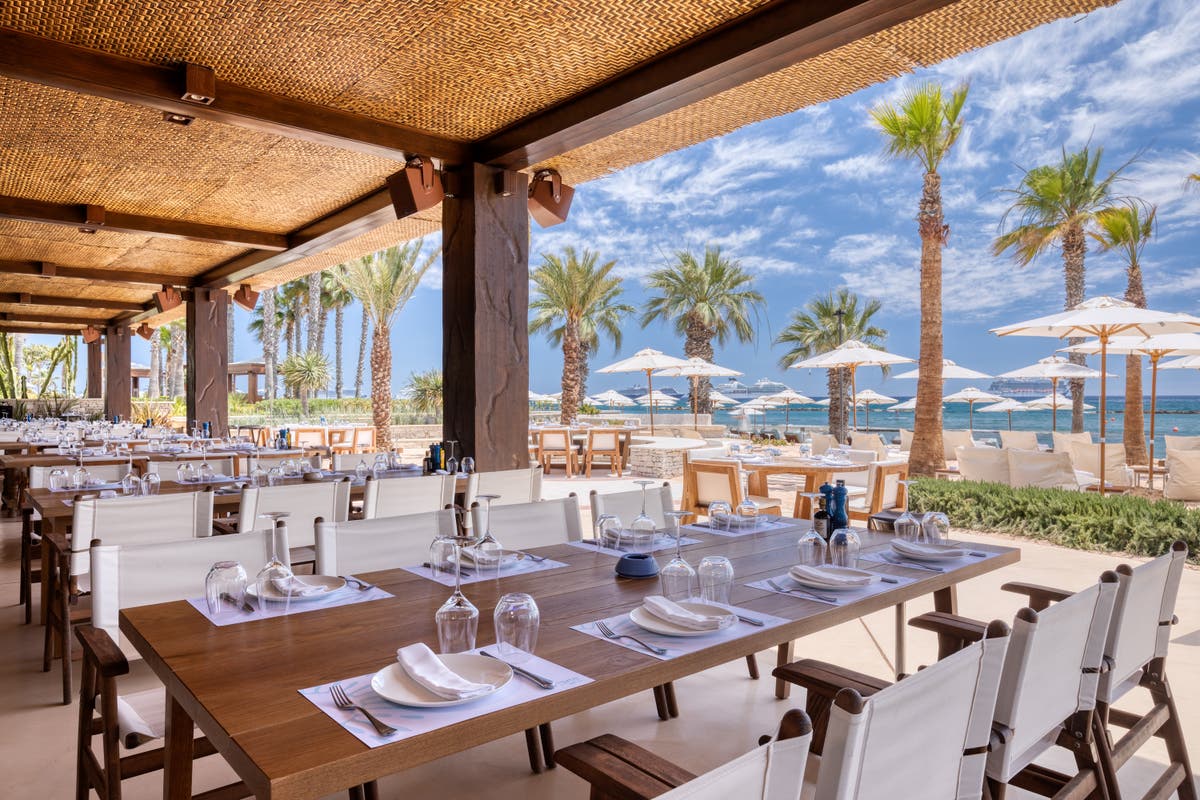 Holding a large plastic paddle above a vat of soon-to-be halloumi cheese, Loulla Efthymiou explains, in Greek there’s one important ritual that must be observed before the next step in the cheesemaking process.

“She is making the sign of the cross,” says tour guide Demetra Argyrou Viguier, as Mrs Loulla (as she’s affectionately known) slides the slotted paddle deep into the creamy white curds (a blend of goat’s and sheep’s milk), slicing vertically then horizontally, before plunging in and churning the solid mass into chunks, ready to be strained.

Working 365 days a year, Mrs Loulla has been producing halloumi and anari cheeses at her farm in hilly Choirokoitia since 2004, using techniques she learned as a child when she began helping her father tend the family’s livestock. People come from miles around to stock up on reputedly the best cheese in the region.

Tucking into thick slices of the deliciously salty finished product, I can see why. Sitting at the dining table in the adjacent farmhouse – photos of Mrs Loulla’s seven children and 15 grandchildren displayed proudly on sideboards in the living room, wind chimes jangling softly in the breeze that blows through the open-plan space – I’m treated to a wonderful spread of the famous cheeses, along with chunks of fresh cucumber and tomato, tangy green olives, crusty bread, and homemade lemonade.

Over lunch, Viguier tells me about the fascinating history of the “little dot in the Mediterranean surrounded by three continents”, as she describes Cyprus Positioned in between Europe, Africa and Asia, the island has been colonised many times (the country gained independence from the British in 1960), which is why it’s home to “a blending of civilisations. Italian, Ottoman, Turkish – everybody left some souvenirs”.

More recently, Cyprus has had to contend with the unwanted arrival of coronavirus. Prior to 2020, the country welcomed some four million visitors a year, who were responsible for around 20% of the country’s GDP.

Now, the half-dozen cruise ships visible from the balcony of my seaview room at the Parklane Resort & Spa in Limassol are a glaring sign of the times. Instead of ferrying holidaymakers around the Mediterranean, these vast, empty vessels have been floating idly off the south coast (and taking advantage of Cyprus’ cheap docking fees, I’m told) for more than 18 months.

But things are, on the whole, looking up. With the scrapping of the amber list, fully vaccinated UK travellers are now only required to do a day two Covid test on return, and from October 24 will be able to take a cheaper lateral flow test instead of a PCR, making Cyprus a very attractive prospect if you’re looking for some autumn or winter warmth.

The popular Parklane is back up to 90% occupancy, but the spacious hotel, part of Marriot’s Luxury Collection, never feels overly crowded during my stay. Opened in 2019, it’s the kind of resort you can check into and completely forget about the outside world. With facilities including a 14-treatment room spa (plus hair salon and barbers), a well-equipped gym and yoga studio, tennis and five-a-side football courts, five restaurants, three swimming pools, and a wide stretch of black sand beach, there’s very little reason to leave.

The latest addition to the property’s dining line-up, Mathis by the Sea, is my idea of culinary heaven. One of world-renowned Swiss chef Reto Mathis’s two signature ingredients happens to be my absolute favourite: truffle. (The other, if you’re wondering, is caviar.) I start my sensational meal with a potent truffle-infused vodka cocktail while munching a light and crispy pizzette topped with cream cheese and truffle. The main is a veal truffle burger and a side order of – you guessed it – truffle fries.

All truffled out, after dinner I hop in a taxi and head into Limassol old town for more cocktails at Gin Garden (gingardency.com), a cool courtyard bar overlooked by the grand façade of a church, the atmospheric space entirely lit by candles and fairy lights.

Nearby, a newcomer to the Limassol foodie scene has brought a century-old building back to life. Previously housing the city’s municipal market before it fell into disrepair, bustling Agora (limassolagora.com) reopened in 2020, populated by more than a dozen food stalls doling out Chinese street food, tacos, sushi, salads, burgers, pasta, pizza, gyros and more, to hordes of hungry punters.

“A lot of people who wanted to open a business [during the pandemic], couldn’t. Now, we’re very happy to see it open again,” says Agora event and marketing director Konstantinos Dionysiou.

The success of the project is a testament to how Limassol – and the country at large – is finally on the road to economic recovery.

Sunseekers from all over Europe are flocking back to their favourite holiday destination – or, like me, discovering it for the first time – and food is a big part of the draw.

How to plan your trip