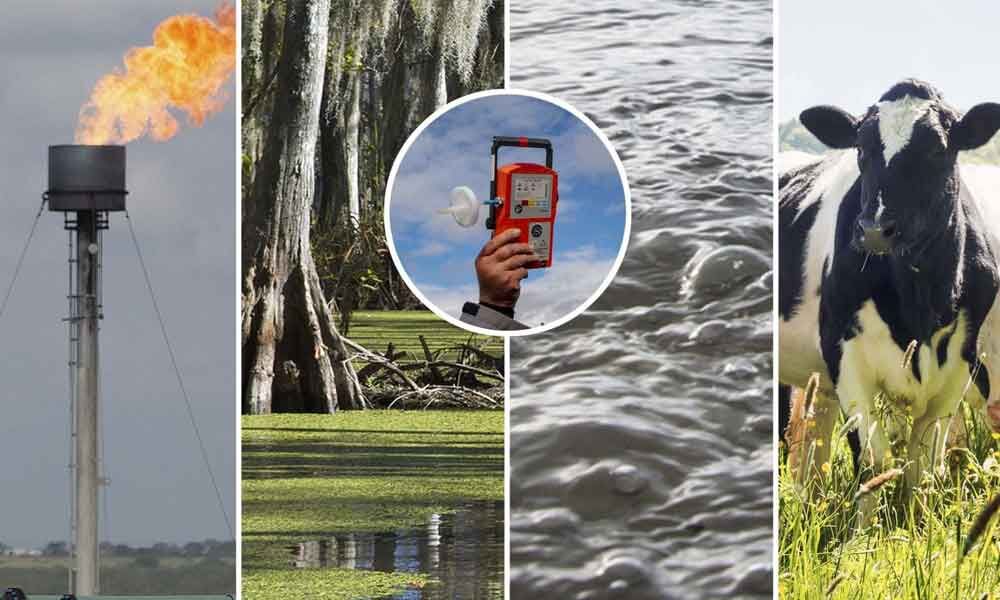 Methane causes more global warming compared to carbon dioxide. The heat waves emanating from the earth have to pass through the atmosphere. These waves cause vibration between the atoms of the gasses if they are present in the atmosphere. The heat then does not escape into space but is trapped in the earth’s atmosphere and causes the earth to become warm. The vibration in methane molecules is much more than in those of carbon dioxide. Thus, methane traps 28 to 80 times more heat and causes more warming. About 100 countries have agreed to limit methane emissions at the just concluded COP-26 meeting in Glasgow to reduce warming caused by methane.

Large amounts of methane are emitted from agriculture and animal husbandry. The fields of paddy are flooded with water. The oxygen in the water is soon depleted. Then the leaves etcetera below the water begin to ferment and emit methane. Methane is also emitted by livestock during digestion as well as during fermentation of the dung. The leaves, twigs and carcasses flowing into the reservoirs of large hydropower projects settle at the bottom and ferment and emit methane. A study by National Environment Engineering Research Institute (NEERI) has found that methane is being emitted by the Tehri reservoir. India has not signed the COP-26 methane agreement saying that it is necessary to increase agriculture, animal husbandry and hydroelectricity for the country’s economic growth.

We had a large number of gobar gas plants across the country till about two decades ago. The methane emitted during fermentation of the dung got trapped, was burnt in stoves and got converted into less harmful carbon dioxide though these plants. The supply of cheap LPG has led to the end of gobar gas plants. The methane produced during fermentation of dung is now being let into the atmosphere. We can reduce methane emissions and attain economic growth if we promote gobar gas. We must also promote vegetarian diet. More methane is produced in the conversion of feedstock into meat. The cost of vegetarian diet is less.

The government is making large hydropower projects like Polavaram in Andhra Pradesh and Lakhwar Vyasi in Uttarakhand. These projects will produce electricity at a cost of Rs 8 per unit or more. Methane emissions from these projects can be avoided and electricity can be produced at Rs 4 per unit if the same money is invested in solar and wind power generation. The government can promote these alternatives and attain both higher economic growth and lower methane emissions.

The present tax policy framework needs to be modified to effectively implement these policies. The price of water supplied to the farmers must be increased and sold to them according to volume to encourage them to move from continuous to intermittent flooding. Presently, most irrigation schemes charge according to the area irrigated irrespective of the amount of water used. The price of LPG must be increased so that it becomes profitable for the farmers to produce gobar gas. Tax must be imposed on all meats so that vegetarian diet is promoted. Large hydropower projects must be abandoned or subjected to high tax so that solar power is promoted.

These taxes will surely lead to increase in the price of rice, LPG, meat and hydroelectricity and affect the consumers adversely. However, this is only the direct effect. The revenue earned from these taxes can be distributed to the citizens of the country through direct cash transfer. The consumer will not be affected at all if such is done. The additional payments made by the consumers in the form of these “methane” taxes will be received back by them in the form of cash transfers. The difference will be that those consumers who consume rice and meat alone will suffer. Let us say the government collects Rs 1,000 crore as methane tax on water used for flood irrigation of rice. This will be paid @ Rs 25 per person by the 40 crore citizens who consume rice. Then, the government makes cash transfer of this Rs 1,000 crore @ Rs 7.40 per person to our 135 crore citizens. The result will be that those who consume rice will pay Rs 25 and get Rs 7.40; while those who do not consume rice will not pay any amount and get a bonanza of Rs 7.40. This will encourage people to move from methane-emitting rice to other crops.

Similarly, let us say the government collects Rs 1,000 crore as methane tax on LPG. This tax will be paid by the 40 crore citizens who use LPG. They would pay Rs 25 per person. Then the government makes cash transfer of Rs 7.40 per person to all the 135 crore citizens. The result will be that those who consume LPG will pay more while those who use gobar gas will get Rs 7.40. They will not be at a loss for using gobar gas because the cost of LPG would have increased due to the methane tax.

In this way we can move towards a low-methane economy without affecting the welfare of the people and also promoting economic growth. The caveat, of course, is that these methane taxes should be used to make cash transfers to the people and not used for paying yet higher salaries to the government servants or other government consumption.

(The author is former Professor of Economics at IIM, Bengaluru)