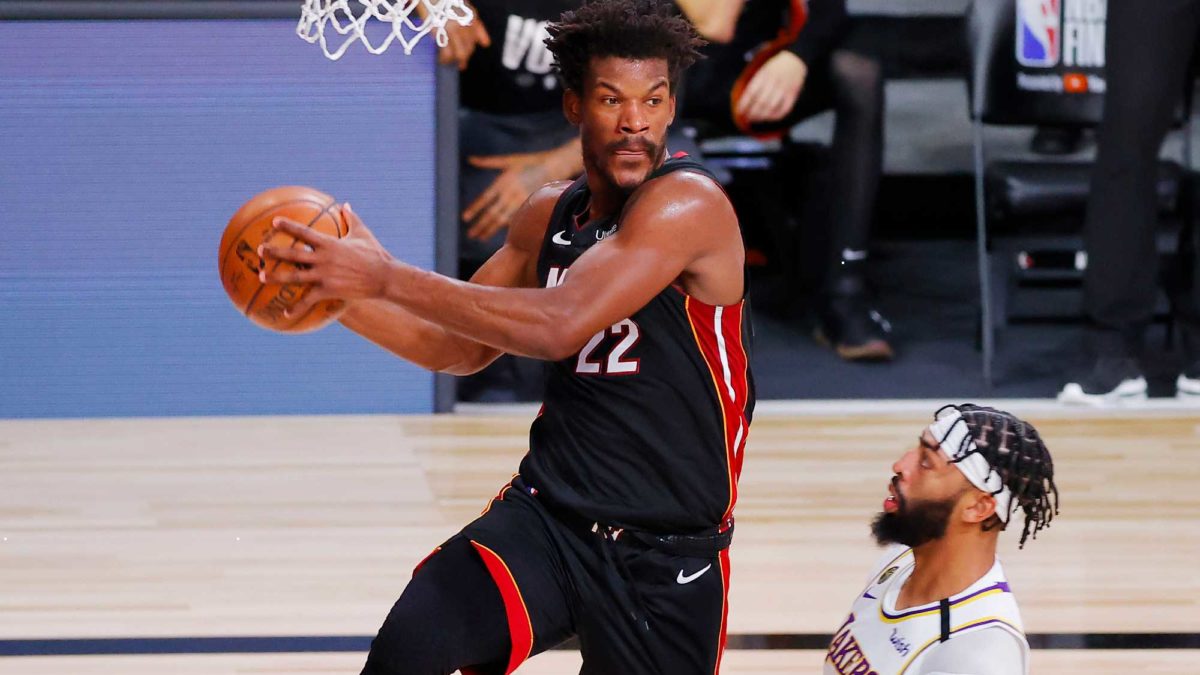 “Jimmy’s under the boards. Jimmy’s in the open. Jimmy makes the shot.”

Those words come from the iconic Seinfeld episode where Jerry’s friend refers to himself in the third person but they’re also music to the ears of Miami Heat fans.

Whenever Jimmy Butler is on the court, Miami’s chances of victory skyrocket.

Pretty much every Jimmy quote from the Seinfeld episode could be used to sum up Butler.

He has been known to wear cowboy boots and listen to country music, which puts him at odds with the hip-hop culture which dominates the NBA.

Butler has been doing just that pretty much since he entered the NBA in 2011, with career averages of 17.6 points, 5.3 rebounds, 4.1 assists, a four-time all-NBA selection, a five-time All-Star and five-time All-Defensive team member.

Butler is renowned for ruffling teammates if he doesn’t think they’re putting in as much effort as him, highlighted by his exit from Minnesota when he showed up younger stars Karl-Anthony Towns and Andrew Wiggins.

After asking for a trade and hitting road blocks from Timberwolves management he took out his frustration during a practice session, verbaling team officials by saying “You can’t win without me. You f—ing need me” as he tore it up at training.

He paired with the team’s third-stringers and took on the starters in a five-on-five scrimmage, going at Towns and Wiggins as his side won to embarrass the two No.1 Draft picks.

Butler has made a career out of proving critics wrong and his chip on the shoulder mentality stems from his childhood in Tomball, Texas, near Houston.

When he was 13, his mother told him to leave and he spent the majority of his high school years sleeping on the floor of friends’ houses until the mother of one of his mates, gave him a permanent home.

He basically became a member of that family, the Lamberts, and in a memorable Draft night interview, he did not hide from the fact that his upbringing had contributed to his rise into the NBA.

“My Mom kicked me out of the house, to tell you the truth, and I bounced in and out of guys’ houses in high school,” Butler said in the 2011 interview.

“In my senior year I found a stable home that just kept me, not because they thought I’d be anything at basketball or that I’d be here being interviewed by ESPN but just because they’re good people and they do good things and they thought it was the right thing to do. Without them I definitely wouldn’t be in this position.

“If you give somebody a chance and you’re on their side and tell them loving things, you never know what can happen. Anybody can make it out of any situation if they have the right people behind them.”

Butler was by no means destined for NBA stardom. He did not get any division one college offers and after starting at Tyler Junior College, he was spotted by a Marquette scout and relocated to Milwaukee.

The chillier climates away from Texas did not suit him and after telling his new matriarch that he was homesick, she told him to tough it out.

And that’s what he did – becoming a star in College who thought he would then become a high lottery pick. But on draft night he was passed over on 29 occasions before the 30th team, Chicago, took him with the last pick of the first round. Coincidentally, Isaiah Thomas was the last pick of the second round that year and also went on to become an All-Star.

If there was a 2011 NBA Draft do-over, Butler would be chosen no lower than fourth behind Kawhi Leonard, Klay Thompson and Kyrie Irving and you could make a case for him being third in light of the Brooklyn guard’s dramatic career drop-off in the past few years.

In his first few years in the NBA, Butler thrived under Bulls coach Tom Thibodeau and collected the Most Improved Player in 2014-15 as he became a legitimate two-way star in the Chicago playoff teams led by Derrick Rose that also featured Joakim Noah, Luol Deng and Carlos Boozer.

If not for Rose’s serious knee injuries that side could have gone all the way to the title but when his career was derailed, Butler became the face of the Chicago franchise.

The Bulls paired Butler with an ageing Dwyane Wade and Rajon Rondo running the point with inexperienced coach Fred Hoiberg and they were bounced in the first round of the playoffs by Boston after a 42-40 record.

Chicago reacted by trading Butler to Minnesota for three young prospects, Zach LaVine, Kris Dunn and the No.7 pick of the 2017 Draft, Lauri Markkanen. Luckily for them, LaVine has turned into an All-Star because they got little else from the rest of that trade. 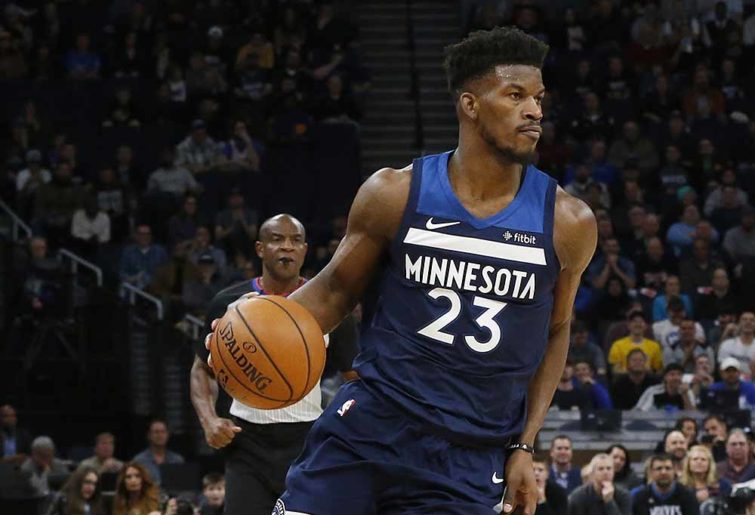 Reunited with Thibodeau at the Wolves, they did what no one else has been able to do any season since 2005 – they led the perennially under-performing franchise to the playoffs but they were also first-round casualties (4-1 at the hands of Houston) and the next season was when it all went pear-shaped.

Philadelphia, after emerging through the dark years of “The Process”, pulled off a coup when they acquired Butler and with Ben Simmons, Joel Embiid and Tobias Harris, they should have made it all the way to the 2019 NBA Finals. And they probably would have except for Leonard’s buzzer-beating Eastern Conference game seven shot which bounced several times around the rim before sinking the Sixers.

Again, a team had a situation of backing a player with proven success at making teams better in Butler but baulked at paying the premium for him.

The 76ers banked on Simmons becoming the player that Butler already was and their fans will never let them forget it in light of the circus of the past six months when the Australian star has refused to suit up for them.

Leaving the Sixers turned out to be the best thing for Butler’s career and at his fourth stop, he yet again made his teammates better, leading Miami to the 2020 NBA Finals in the Florida bubble against the Lakers.

Heading into the bubble during the pandemic, Butler said he was not taking any family members with him because it was purely a business trip.

Although clearly outclassed against a team led by LeBron James and Anthony Davis, there was no backing down from Butler, who challenged LA from the jump and took two games from them before the Lakers wore them down.

Miami are renowned for their “Heat culture” which puts heavy demands on all players with regards to fitness, dedication and commitment to a team ethic – no one personifies that better than Butler.

The Heat were victims of a Milwaukee revenge mission in the first round of last year’s playoffs but despite Butler missing 10 games mainly due to an ankle injury, he is again on the verge of All-Star selection and has his team atop the congested Eastern Conference with a 31-17 record after downing New York 110-96 in Miami on Thursday.

Butler is averaging 21.4 points, six boards and as many assists this season but, as per usual, while he doesn’t dominate the NBA’s scoring leaderboard or rack up a bunch of viral highlights, the 32-year-old swingman is getting results.

The Bulls, Timberwolves and 76ers would love to have that kind of player on their team right now and he always goes up a gear when he faces those three teams.

Earned…..not Given???????? Keep being great & showing the @NBA the point guard position is in GREAT HANDS for a loooong time. Tee Morant, I told you in L.A. you had no worries. Congratulations brutha✊????@TheTraeYoung @JaMorant @ATLHawks @memgrizz pic.twitter.com/4nZMnIJ38w

Memphis (33-17) have leapfrogged Utah (30-19) into third spot in the Western Conference and high-flying guard Ja Morant was rewarded with an All-Star starting berth.

Kevin Durant is sidelined and with James Harden again bothered by a hamstring injury, Kyrie Irving can step up in this road game to give Brooklyn a chance against Golden State. The Nets could drop to sixth in the crowded Eastern Conference playoff race if they lose this one.