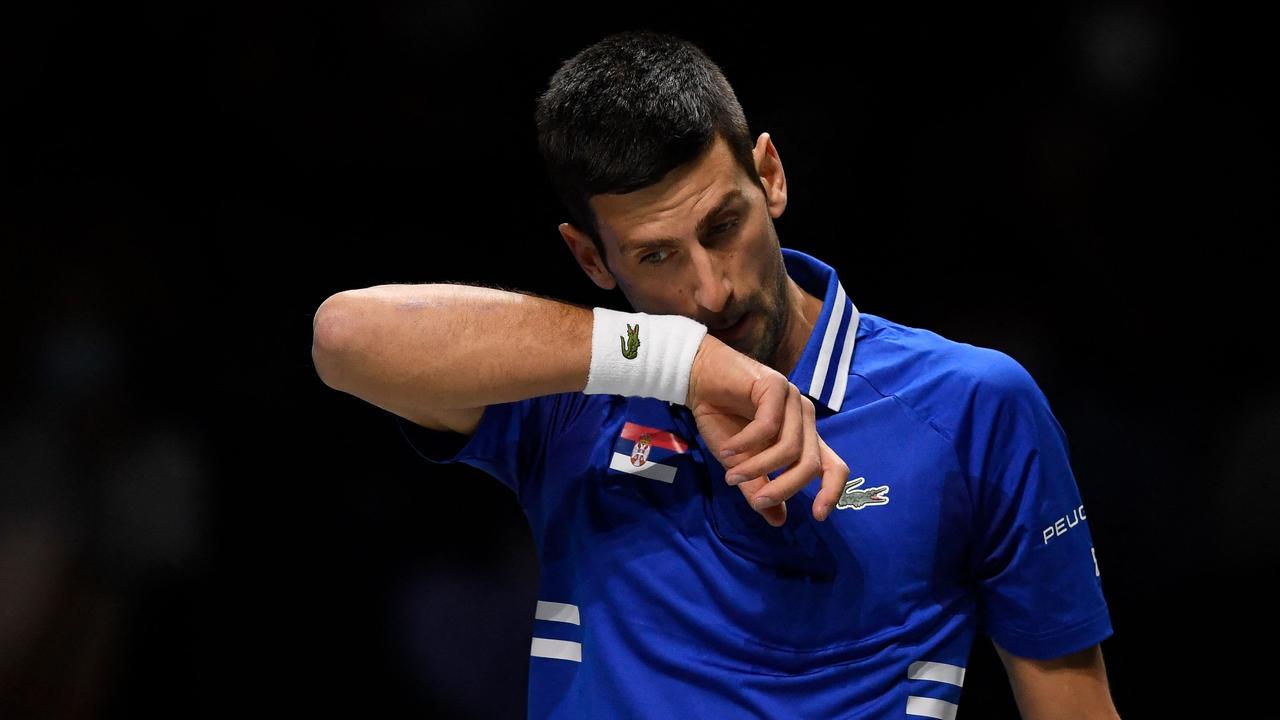 Novak Djokovic has been told to leave Australia after his visa was cancelled as the storm around his vaccination exemption exploded.

Novak Djokovic’s visa has been cancelled and his Australian Open campaign is in tatters.

The tennis star was told to leave the country after controversy erupted over his vaccine exemption but he is expected to challenge the decision in Victoria’s courts.

Djokovic will reportedly be transported to a quarantine hotel in the city before boarding a flight back to Europe.

Prime Minster Scott Morrison tweeted on Thursday morning: “Mr Djokovic’s visa has been cancelled. Rules are rules, especially when it comes to our borders. No one is above these rules.

“Our strong border policies have been critical to Australia having one of the lowest death rates in the world from Covid, we are continuing to be vigilant.”

The world No. 1 touched down on an Emirates flight from Dubai into Melbourne shortly after 11pm Wednesday night AEST.

His father Srdjan reportedly told a Serbian radio station his son was “isolated in a room” at the airport without his entourage and was held under police guard. Djokovic was in that room for more than eight hours.

“If they don’t let him go in half an hour, we will gather on the street, this is a fight for everybody.”

Even Serbian president Aleksandar Vucic became involved, saying the country “will fight for Novak Djokovic, for justice and truth”.

However, shortly after the president weighed in, Djokovic’s visa was cancelled.

“It’s up to him whether he wishes to appeal that, but if a visa is cancelled, leave the country.

“Yes, it is tough but it is fair and one rule for all under this Australian Government.”

“The ABF can confirm that Mr Djokovic failed to provide appropriate evidence to meet the entry requirements to Australia, and his visa has been subsequently cancelled.

“Non-citizens who do not hold a valid visa on entry or who have had their visa cancelled will be detained and removed from Australia.

“The ABF can confirm Mr Djokovic had access to his phone.”​

A federal government source told The Age there were issues regarding the documentation required to prove the reason for Djokovic’s exemption, which is required from unvaccinated people.

Djokovic was believed to be relying on the fact that he has had Covid within the past six months however the source said it was unclear if that was sufficient to secure entry under federal guidelines.

Some reports suggested a member of Djokovic’s team may have filled out the incorrect visa application for him, which does not apply to people who have received vaccination exemptions.

Earlier the Victorian Government said it was rejecting Djokovic’s entry because he was on a work visa which requires the support of the state government.

Acting Sports and Major Events Minister Jaala Pulford tweeted at 11.14pm that the Victorian Government would not support Djokovic’s application.

“The Federal Government has asked if we will support Novak Djokovic’s visa application to enter Australia,” she said.

“We will not be providing Novak Djokovic with individual visa application support to participate in the 2022 Australian Open Grand Slam.

“We’ve always been clear on two points: visa approvals are a matter for the Federal Government, and medical exemptions a matter for doctors.”

Australia reacted with disgust to news the nine-time champion at Melbourne Park had been granted a vaccination exemption to play in the tournament starting on January 17.

And despite months of claims from Victorian government officials Djokovic wouldn’t be able to play without being fully vaccinated, the Serbian — an outspoken anti-vaxxer — revealed he had been granted permission to compete in the grand slam.

Home Affairs Minister Karen Andrews released a statement on Wednesday and Prime Minister Scott Morrison made remarks appearing to imply Djokovic was not yet in the clear.

The Prime Minister was asked by reporters on Wednesday afternoon if he personally supported the decision to grant Djokovic an exemption. He warned the tennis star could find himself “on the next plane home” if he can’t provide sufficient evidence as to why he is unable to be vaccinated.

“My view is that any individual seeking to enter Australia must comply with our border requirements,” Morrison said.

“Now when Novak Djokovic arrives in Australia — I’m not quite sure when he’s going to turn up but I don’t think it’s too far away — He has to because if he’s not vaccinated, he must provide acceptable proof that he cannot be vaccinated for medical reasons and be able to access the same travel arrangements as fully vaccinated travellers.

“So we await his presentation and what evidence he provides to support that.

“If that evidence is insufficient, then he won’t be treated any different to anyone else and he’ll be on the next plane home. So there should be no special rules for Novak Djokovic at all. None whatsoever. And so if medical exemptions have been provided by medical professionals and that’s been furnished to him as a proviso for him to get on that plane, well, that will have to stack up when he arrives in Australia.

“There are other cases — there are quite a number over the last couple of years — where people have had these exemptions and have the suitable proof to support their claim in those circumstances.

“So the circumstance is not unique. The issue is whether he has sufficient evidence to support that he would qualify for that exemption.”

Andrews’ statement earlier on Wednesday didn’t mention the 20-time major winner by name but there was no doubt who the statement was referring to.

“Any individual seeking to enter Australia must comply with our strict border requirements,” her statement read.

“Since 15 December 2021 fully vaccinated eligible visa holders can travel to Australia without needing to apply for a travel exemption, and enter eligible states and territories quarantine free.

“If an arriving individual is not vaccinated, they must provide acceptable proof that they cannot be vaccinated for medical reasons to be able to access the same travel arrangement as fully vaccinated travellers.

“Australian Border Force will continue to ensure that those who arrive at our border comply with our strict border requirements.

“No individual competing at the Australian Open will be afforded any special treatment. Quarantine requirements for international arrivals in Victoria, including for non-vaccinated individuals, are a matter for the Victorian Government.”

The statement raised several questions as social media reacted to the latest twist in the ongoing saga.

“So Djokovic is currently in the air. Things could get interesting at Tullamarine …”

The Herald Sun’s Kieran Rooney said: “My reading of this is Djokovic will need to show proof of his medical exemption to border force/airline on arrival.

“Others have suggested that this border force arrangement may have already played out when he was granted a visa … Either way, federal authorities needed to approve Djokovic’s arrival (with medical exemption) into the country in some way.”

Rugby league reporter Brad Walter was asking questions that were likely shared by many after Andrews released her statement.

“What does that mean? Is the Federal Government going to stop him coming or playing? Or are they saying that it was them who granted him an exemption? Or does he now have to apply to them?” Walter wrote on Twitter.

Fellow journalist Jack Snape replied: “Border Force may have questions over info Djokovic has provided in his application for an exemption. ‘Acceptable proof’ in the Andrews statement suggests the information may have been acceptable to Vic, but to Border Force? Maybe not.”

Players must be fully vaccinated — or possess an exemption — to compete in the Australian Open.

Djokovic’s vaccination status has been clouded in mystery as he has refused to reveal whether he has received the jab or not, but he has made his stance on the matter clear, saying in April 2020 he was opposed to mandatory vaccinations.