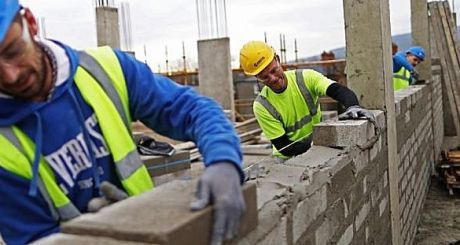 Construction has begun on more than 3,200 homes on the month, bringing the total figure over the previous 12 months to over 30,500 – the highest annual figure since July 2008, according to Davy.

The commencement notices published by the Department of Housing on Thursday show 3,203 residential units were received by building control authorities in September. This represents a 48 per cent increase on August.

The data shows that, in the year to September, 30,519 residential units were commenced, up 40 per cent year-on-year, when compared to the same period to September 2020.

Davy said the “enormous pick-up” in housing starts, well above the 20,500 completions in 2020, “poses upside risks to our forecasts”.

The figures are still below an estimate contained in a Central Bank report published before the onset of the Covid-19 pandemic which suggested about 34,000 homes will have to be built each year for the next decade just to meet demand.

Some 58 commencement notices for residential developments were received in September. This was an increase on August, when 559 notices were received.

Data shows that, in the year to September, 6,324 units were commenced, up 23 per cent year-on-year when compared to the same period to September 2020.

Commencement notices relate to either one-off units, units in a scheme or material change of use to a dwelling.

Of the 3,203 residential units in September, 485 single residential (one-off) units were commenced. This was an increase on August’s total of 466.

Data shows that in the year to September, 5,243 units were commenced, up 22 per cent year-on-year when compared to the same period to September 2020.

Of the overall number of commencements, 19,600 were outside Dublin and “more likely to be traditional housing rather than apartment developments”, according to Davy.

“Indeed, we have obtained unpublished Department of Housing data which indicate that roughly two-thirds of the starts over the past year have been houses rather than apartments,” it said.

“Clearly, September’s housing starts figures show even more momentum in the homebuilding sector. Typically, there has been a 12-month lag between starts and completions – pointing to upside risks to our forecast.

“That said, the lag-lead relationship may have become extended as apartment development has grown.”

Prior to the Covid-19 pandemic there was concern that input cost inflation, labour shortages and rising wage costs illustrated growing capacity pressures that could hold back construction from delivering 30-35,000 units per annum, Davy continued.

“That starts have now accelerated to 30,500 demonstrates that there was already sufficient capacity.

“This is a level of output which, if delivered, would still be the lowest level of completions since 1994, excluding the years following the global financial crisis in 2008.”