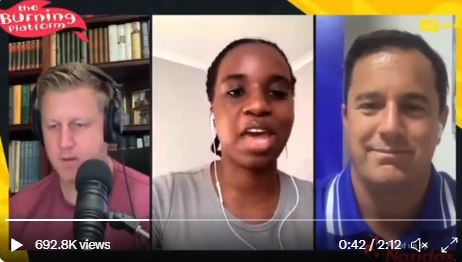 He was accused of smirking during the cringeworthy panel debate where host Gareth Cliff dismissed racism struggles as unimportant.

During an Interview on 702 on Sunday, Steenhuisen was asked why he was seen smirking while Cliff essentially told One South Africa Movement member Mudzuli Rakhivhane her lived experiences on race were “completely anecdotal” and “unimportant”.

Steenhuisen said he did not ‘smirk’ during Gareth Cliff’s Burning Platform show.

“Are we policing people’s facial expressions in South Africa, I find it very odd in this situation. It is like blaming a passenger in a taxi because the driver of the taxi jumped a stop street and had an accident with somebody.

“I was a guest on the show. I was invited to talk about service delivery, and if you watch the full interview, that is exactly what I did. What Gareth did with another guest is his business.

“When you start policing people’s facial expressions, I really think we are starting to hit a new low in South Africa.”

On Saturday, Nando’s terminated its sponsorship of The Burning Platform “with immediate effect”.

In a statement it said:

“There are many instances in which Nando’s has not agreed with the opinions of both guests and presenters on CliffCentral.com, but we have upheld their right to express their views as a core component of a healthy constitutional democracy.

“In the case of The Burning Platform episode which aired on October 21, Nando’s is of the view that Gareth Cliff failed to create an environment where free speech was possible by talking over Mudzuli Rakhivhane and dismissing her view while not allowing her to adequately express it.”