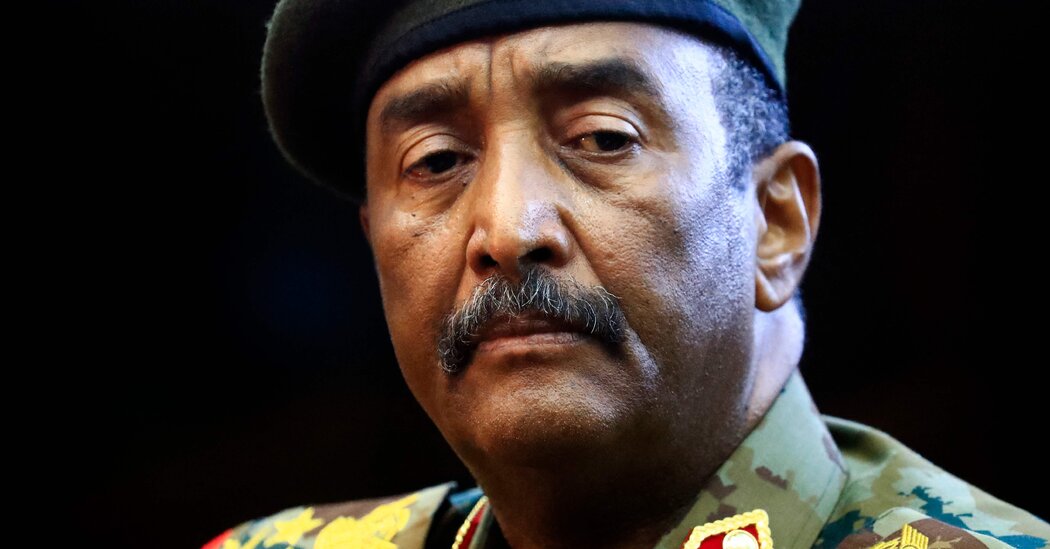 NAIROBI, Kenya — For days, the American envoy navigated between Sudan’s army chief and prime minister, striving to head off the collapse of a tenuous democratic transition in the country that had been two years in the making.

In a frantic series of meetings in the Sudanese capital of Khartoum last weekend, Jeffrey Feltman, the U.S. envoy to the Horn of Africa, sought to narrow the differences between the army chief, Lt. Gen. Abdel Fattah al-Burhan, and the civilian prime minister, Abdalla Hamdok, who had been sharing power since the 2019 ouster of the longtime autocrat Omar Hassan al-Bashir.

At a final meeting late Sunday afternoon, General al-Burhan argued that Sudan’s cabinet should be dismissed and replaced with technocrats, but gave no indication he was preparing to seize power.With that reassurance, the American diplomat wrapped things up and caught a flight to Qatar where, on landing, his phone lit up: A coup was underway in Sudan.

“They lied to him,” said Nureldin Satti, Sudan’s ambassador to the United States, referring to his country’s military leadership. “This is very serious, because when you lie to the U.S., you have to pay the consequences.”

No one factor appeared to prompt General al-Burhan to call a halt to Sudan’s democratic transition. Nor is it certain his coup will succeed, given the mass demonstrations called for this Saturday.

In a series of interviews with analysts and multiple American, Sudanese and European officials, a picture emerged of a military that had grown frustrated with its civilian partners and was intent on maintaining its privileged position and avoiding any investigations into its business affairs or human rights abuses during Mr. al-Bashir’s three decades of rule.

Some also faulted the civilian opposition for failing to assuage the generals’ fears of prosecution while the transition to democracy was still underway, while one U.S. official said that Russia had encouraged the coup in hopes of securing commercial advantages and a port on the Red Sea.

Sudan’s civilian leadership had been living in fear of a military coup for at least 18 months. Last weekend, as pro-military protesters camped outside the presidential palace and a pro-military ethnic group closed off the country’s main seaport, it seemed imminent.

Around noon on Monday, General al-Burhan announced the dissolution of the country’s governing bodies, arrested the prime minister, blocked the internet and announced a nationwide state of emergency. He also disbanded the committees managing the country’s trade unions, while his security forces arrested top civilian leaders, at least one of whom was badly beaten, according to Western officials who spoke on condition of anonymity, under normal diplomatic practice.

His moves plunged the nation into a wave of deadly protests and work stoppages, and drew condemnation from regional and global leaders who insisted on the need to return to civilian leadership. But none of that has seemed to soften the resolve of General al-Burhan and his confederates.

“We are back to square one,” said Dr. Jihad Mashamoun, a Sudanese researcher and analyst. “General al-Burhan has once again set the seal on the military’s dominance in Sudanese affairs, and the people will come out to face him.”

Little known before 2019, General al-Burhan, 61, rose to power in the tumultuous aftermath of the military-led coup that ousted Mr. al-Bashir. Then the inspector general of the armed forces, he played a role in sending Sudanese troops, including children, to fight in Yemen’s civil war. He had also served as a regional army commander in Darfur, when 300,000 people were killed and millions of others displaced in fighting between 2003 and 2008.

A close associate of Mr. al-Bashir, the general firmly believed the military was the most important institution in the country, tantamount to the state itself, said Cameron Hudson, a nonresident senior fellow with the Atlantic Council’s Africa Center.

Thrust into the public eye following a popular uprising against the strongman ruler, he proved a reluctant leader, unaccustomed to the international stage. Under the long decades of isolation and international sanctions under Mr. al-Bashir, his sphere of travel had been limited to a handful of Middle Eastern countries, including Egypt and the United Arab Emirates.

By contrast, Prime Minister Hamdok, 65, an economist by training, had spent much of his career working at international financial institutions and consulting firms.

The two leaders remained amicable in the beginning, with Mr. Hamdok’s government overseeing a raft of reforms that succeeded in removing Sudan from the U.S. list of countries that sponsor terrorism, banned female genital cutting and scrapped apostasy laws. He also signed a peace agreement with rebel groups.

But their relationship soon soured over the question of how best to manage the country and the economy. Those differences deepened after a coup attempt in September.

Tensions rose further in recent months, as pro-democracy groups stepped up calls for the military to relinquish power to civilians and for the transitional government to investigate human rights abuses and corruption under Mr. al-Bashir. The military balked, analysts and officials said, fearful that any measures of accountability would expose their personal, financial and factional interests.

“It’s all tactical retreat,” said Mr. Hudson, arguing that the generals signed the power-sharing agreement in 2019 in order to relieve pressure on the military, not because they truly believed in it. “The only through line in all of this is the military’s survival.”

“The two generals have had very close relations since Darfur and have everything to worry about if Mr. al-Bashir is taken to the I.C.C.,” Mr. Mashamoun said. “They would like to see some sort of immunity.”

The armed forces and intelligence services have also resisted efforts to rein in their extensive financial power.

Together they control hundreds of state-owned enterprises dealing in the production and sale of minerals including gold, imports and exports of livestock, construction materials and pharmaceuticals. Rife with corruption, the companies rarely contribute their profits to the national budget, said Suliman Baldo, a senior adviser at The Sentry, a Washington-based group that seeks to expose corruption in Africa.

General al-Burhan also heads the board of trustees for Defense Industrial Systems, one of the military’s biggest firms. “He is doubling up as a corporate baron while he’s also the general commander of the army and now the de facto head of state,” Mr. Baldo said.

But civilian leaders in the transitional government bear some of the blame for the breakdown in relations, said Mr. Satti, the Sudanese ambassador, whom the military said Thursday it had fired along with other ambassadors who had publicly condemned the coup. Mr. Satti insisted that he was still on the job.

“There is a tug of war and a mutual provocation between the two sides,” he said. He added that some civilians did not understand the importance of alleviating the military’s fears.

With rising inflation and a shortage of basic goods, Mr. Hamdok faced a lot of pressure, too. A technocrat by training and temperament, he lacked the political skills to manage the tensions, Mr. Satti said.

There were “too many actors, a lot of disagreements and not a proper background to understand the requirements of the moment,” he said. “And he pushed too hard, too fast.”

Analysts said that General al-Burhan would not have undertaken the coup without at least the tacit approval of powerful allies in the Middle East. Two of those, Egypt and the United Arab Emirates, have yet to criticize the coup, while Saudi Arabia has condemned it, the U.S. State Department said in a statement.

General al-Burhan has defended the coup as necessary to avert a “civil war” and promised to transfer power following elections in 2023. It is a timeline many young Sudanese say they do not agree with, a point they plan on making in Saturday’s protests.

“It’s going to be a showdown,” Mr. Mashamoun said.