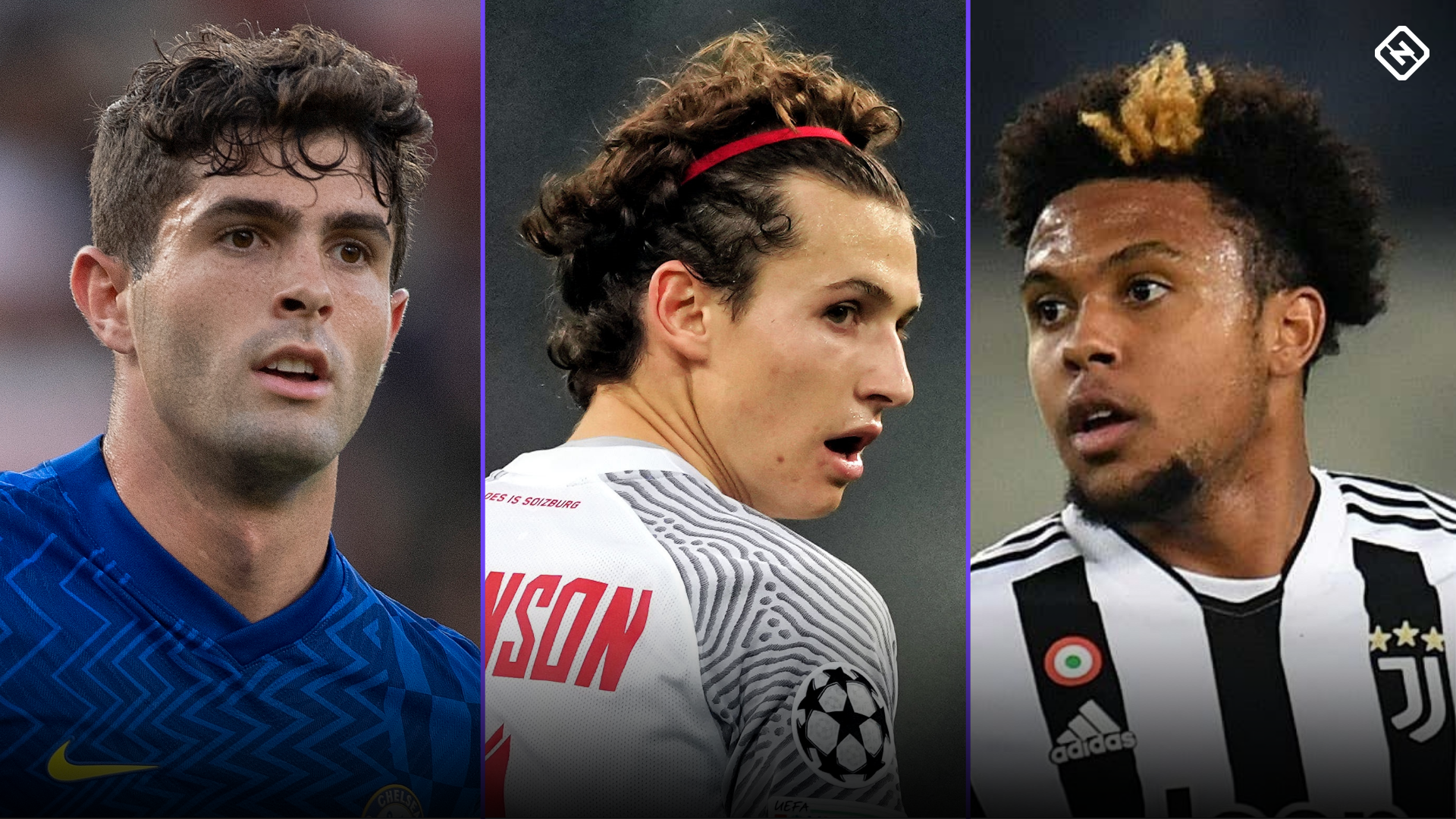 American players are making a push across the globe for playing time at bigger clubs both home and abroad.

USMNT veterans find themselves playing for clubs like Barcelona, Chelsea, and Bayern Munich, among many other giants of Europe. In addition, domestic clubs are paying more and more money in transfer fees for USMNT stars, giving credence to domestic transfers.

The biggest names are drawing more and more interest, which naturally leads to more and more speculation, and as a result, American players have found themselves the talk of the town across England, Germany, Spain, and other European soccer hotbeds.

MORE: All the winners from the FIFA The Best awards

Here is a full look at the most notable transfer reports and rumors regarding American players across the world.

Before we get to the rumors, here is a list of all American players transferred both this past summer and this winter. This list will be updated if any other deals are confirmed.

Transfer fees according to Transfermarkt.us

Below is an updated list of all notable transfer reports and rumors involving players who either have played for the United States national team or are eligible to do so.

Since the arrival of Thomas Tuchel at Chelsea, Christian Pulisic has found it difficult to nail down a starting place at Stamford Bridge. It was difficult enough with the club bringing in talented attacking players like Kai Havertz, Timo Werner, and Romelu Lukaku, but Tuchel’s tactical preferences have left wingers like Pulisic on the fringes. Tuchel prefers to play a 3-4-2-1, which has forced Pulisic to play wingback or striker with Mason Mount owning the No. 10 role.

In December, English journalist Paul Brown reported that Pulisic is getting plenty of interest and has “teams looking at him.” Spanish outlet Fichajes also reported that Chelsea hoped to “cash in” on Pulisic in January, but nothing has since materialized. Earlier that same month, Spain’s Mundo Deportivo named Barcelona as a club that could be looking to bring in Pulisic during the winter.

Barcelona’s financial crisis has caused the club to look for options to free up wage space and to bank transfer fees for assets. Sergino Dest has been caught up in that mess, with the young fullback missing time this season with an injury, and unable to find time under new manager Xavi.

While rumors seem split on whether Dest will push for a move or whether he will remain to fight for his place at Barca, there has been significant noise regarding an exit from the Camp Nou though chatter about specific clubs interested in the 21-year-old hasn’t truly ramped up during the first part of January.

Dest’s agent Michael Reschke spoke to German outlet Ran (Jan. 17) regarding Dest’s situation at Barcelona, saying that Dest “feels good” at Barcelona and says a move is “unlikely” at this point.

That public statement came after Spanish daily Sport reported on Jan. 7 that Chelsea is “keeping an eye” on the 21-year-old though Dest “wants to stay at Barcelona.” Bayern Munich, which was interested in signing Dest before his Barcelona move, has also been mooted after rumors began to swirl in December. But manager Xavi said early on that the player’s absence from the lineup was injury-related, not performance-related.

Since moving from Schalke to Juventus, first on loan in 2020 and then permanently a year later, the 23-year-old has experienced a revival. Juventus saw the raw talent at Schalke and the club has molded McKennie into a regular midfield starter for a European power. But Juventus has performed below expectations this season, currently in a battle just to secure a Champions League place, and there could be casualties from such a disappointment.

McKennie struggled with consistency in the run-up to the 2022 January transfer window, igniting a flurry of rumors. Since then, he has responded with goals in back-to-back games, including one against Udinese in the league and another against Inter in the Italian Super Cup. The rumors seem to have tapered off for now as a result.

The strongest hints at a move came from Italian publication Calciomercato which reported that Tottenham boss Antonio Conte sees McKennie as a potential improvement for the Spurs midfield. But with Massimiliano Allegri frequently using McKennie, the report indicated that a significant offer would have to come in for Juventus to even entertain the move.

Only just arriving at RB Salzburg from MLS a year ago, Aaronson has made a splash in his year in Europe. With 10 goals and 12 assists since singning for RB Salzburg, the 21-year-old winger has seen his name become one of the first on the teamsheet for boss Matthias Jaissle. His performances have reportedly caught the attention of those in the Premier League, and it has seen a flurry of reporting as the end of the January transfer window nears.

While Aaronson could make a lucrative switch to the Premier League this winter, it would mean giving up on Champions League action. Aaronson helped RB Salzburg progress from its Champions League group and it’s now set for a high-profile matchup against Bayern Munich in the knockout stage. That series could increase his transfer value if he has a star showing.

The Athletic reported on Jan. 18 that Leeds United has seen a $21 million bid rejected for Aaronson. The report further stated that Leeds “remains intent on signing the forward” despite the rejected bid. The club may see Aaronson as a replacement for Rafinha who has been heavily linked with a departure from Elland Road.

Since moving to RB Leipzig in the winter of 2019, Tyler Adams has become a fixture at the Bundesliga club and helped them make a consistent Champions League push every season. Even this year, where a disappointing first half sees RB Leipzig sitting back in seventh, they remain just three points back of a top-four spot.

The American is still just 22 years old and his contract doesn’t expire until 2025, so it would seem unlikely that any deal would be forthcoming, but rumors have popped up anyways.

In December, English tabloid Metro stated that Adams could be an option for Manchester United this January. The article appears to be more speculation than actual reporting, as it posits that the addition of former RBNY boss Chris Armas to the Manchester United coaching staff could open a door for Adams, but doesn’t give any other specifics.

Months earlier in June 2021, The Athletic reported that Arsenal had interest. While the trail here has gone cold since the summer, it’s worth noting since Arsenal is in dire need of midfielders and previous intrest can often provide a gauge for future movement.

🚨🚨🚨🚨🚨 Breaking news!!@Arsenal have put in a strong bid for @headdturnerr from the @NERevolution today. What a great opportunity for both the player & franchise to further enhance their brand. What a great time to be a #NERevs supporter. #MLS

After a record-breaking season with the New England Revolution, a report in mid-January from ESPN’s Taylor Twellman stated that Arsenal has submitted a “strong” bid for Turner. It was a shocking report that confirmed a European power’s high opinion of the USMNT goalkeeper.

While there remain questions regarding Turner’s playing time at Arsenal with a World Cup on the horizon, it’s undeniable that Turner could challenge in the Premier League. Arsenal has starter Aaron Ramsdale in good form, but backup Bernd Leno’s contract expires in 2023 and as a result could leave this summer if Turner arrives.

It’s also likely that Turner would be sent out on loan if he moves to London, as it would be a tall order to stake a claim as the starter or even backup as a new player in a loaded goalkeeper room, and it benefits nobody for him to sit and rot as the third option.

Paul Arriola has been rumored to leave D.C. United much of this winter, but it felt like a simmer at best. Over the past few days, those rumors have shot up into full-blown reporting, and according to The Athletic, FC Dallas has beaten out Club America to sign Arriola in what amounts to a record-setting deal.

The reported deal is for $2 million in General Allocated Money, which would mark the highest inter-league transfer return in MLS history. Another $300,000 rides on bonuses and escalators. Just days before, Club America also submitted a number of consecutive bids, according to ESPN’s Hercules Gomez, but have apparently failed in their attempt to secure the 26-year-old’s future.

Soon after the Matt Turner news dropped, another MLS goalkeeper reportedly garnered European attention. 17-year-old Chicago Fire goalkeeper Chris Brady, who is stuck behind fellow teenager Gabriel Slonina, could be afforded the chance to move overseas, as a report by ESPN’s Jeff Carlisle has linked him with Belgian side Club Brugge.

Brady, a product of the MLS club’s academy, signed a Homegrown deal back in March of 2020 and has spent most of that time on loan at USL League One side Forward Madison, where he earned the league’s Young Player of the Year award.

According to a report first by Gianluca di Marzio and then Tom Bogert, 20-year-old Roma right-back Bryan Reynolds is headed out on loan to Belgian club Kortrijk for the remainder of the season. Bogert’s report states there is no option to buy, so Reynolds will return to Italy at the conclusion of the season. He was linked to bigger clubs, but Roma likely felt this would be the best place for Reynolds to continue developing. Reynolds has two caps for the USMNT, both coming in friendlies last calendar year.

Below is an updated list of all recently completed transfers involving players who either have played for the United States national team or are eligible to do so.

At just 19 years old, Ricardo Pepi has established himself as the first-choice striker for the US National Team. That came with perks, one of them being European interest.

It was heavily rumored that a number of Bundesliga teams were showing interest, and FC Augsburg pounced, snatching the FC Dallas frontman for a big $18 million winter tranfer fee. Pepi earned his first appearance for the club just days later, while bagging his first start on January 16.

Another young striker who benefitted from a hot start to his USMNT career, the 21-year-old secured a move to Championship side West Brom in the winter transfer window. His debut for the Baggies came on January 15, and his $9.5 million transfer fee comes with plenty of promise. Dike signed a four-and-a-half year deal through the summer of 2026.

We’re delighted to welcome @USMNT international forward @DarylDike to the club on a permanent contract. ✍️🇺🇸

After making his mark with a fabulous showing at the 2021 Gold Cup, playing every minute for the USMNT after the competition’s first match, Sands’ stock rose considerably, and Scottish giants Rangers took notice. Sands made the switch this winter on an 18-month loan with an option to buy.

He made his Rangers debut on January 18, starting and playing all 90 minutes in a 1-1 draw with Aberdeen. Rangers sit first in the Scottish Premiership table, but Celtic is just four points back, so Sands has plenty of pressure to perform and earn a place amid a title challenge.

The 20-year-old midfielder, who made his USMNT against Bosnia in December and scored the game’s only goal, has secured a switch to Dutch side Feyenoord on an 18-month loan with an option to buy, just like Sands. It’s a big step up for the youngster who burst onto the scene as a teenager in 2018 and made 75 appearances for the Colorado Rapids. Feyenoord sits third in the Eredivisie table, so Bassett has a tough challenge ahead.