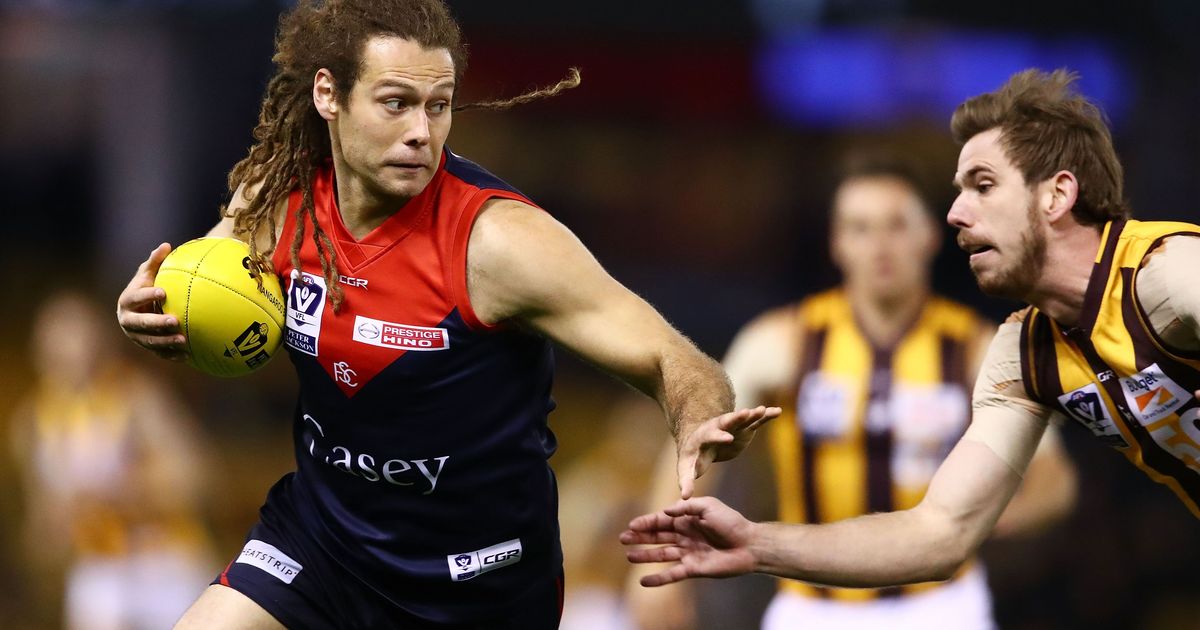 REACHING 100 VFL matches and earning a club life membership – it’s a common thread among the stalwarts who stepped away at the end of last year.

And Jack Hutchins will hold those honours close to his heart forever after calling time from his beloved Casey Demons.

Hutchins, 29, played 93 VFL matches for the Demons after seven as one of Gold Coast’s 12 foundation recruits in 2010 for an even century in the Victorian state league.

“Going into last year I knew it was going to be my last, which made it a bit sweeter to take the year for what it was,” Hutchins said.

“Even though there were a lot of disruptions with COVID, I was still able to really enjoy the year and being able to notch up 100 games and get life membership of the club is something I’m quite happy to hang my hat on.

“I’ve had a decent run with a professional and semi-professional career, probably a good 12-13 years in the AFL system and continuing with the VFL.

“The love (for Casey) hasn’t changed, I just think it’s a good time to move on – the club is in a fantastic position and it’s time to start thinking about other aspects of my life.

“I can certainly appreciate having played those 19 AFL games and being on the list for four or five years – and going into Casey … the second year we made the finals and had the club’s first finals win in about eight years, and a couple of finals wins to get into Grand Finals.

“Obviously we didn’t get the chance to win either of the two, but still being able to play in a VFL Grand Final was pretty special.”

Hutchins said the health of Melbourne’s list as it charged to a drought-breaking AFL premiership last year – forcing him out of Casey’s side three times – wasn’t a factor in his decision.

“Going into an aligned club you know what you sign up for,” he said.

“Having Melbourne in such a healthy position was a good thing, and the fact I was able to play for Cheltenham was fantastic … I had a great time, the club was fantastic and I’ve got a couple of good mates there.

“I would have loved to continue to play at Casey (every week), but it was no issue at all.”

Returning to Mansfield and pulling on the guernsey he grew up idolising is another measure of the man who captained Casey and was its most reliable defender for seven years.

“I always had that desire to come back and play – when I was growing up we were fortunate enough to have a pretty successful time at the footy club,” Hutchins said.

“Watching guys like David Mensch win a flag or two while I was growing up in the town always drove a bit of passion in me to pursue that once I called time on my professional career.

“The club looks to be in a really good position with a young list of local guys, so it’s a perfect time stepping away from a VFL club to come in and impart some knowledge.

“There’s no senior (coaching) position for me at Mansfield yet, Chaddy Owens is doing a really good job, but I could probably have that role naturally on the field because I’m a lot older than a lot of guys.”

Hutchins was quick to admit a glaring oversight when he farewelled Casey Fields.

“When I accepted the life membership I forgot to thank my family, so I should definitely throw them in – they’ve been a massive support,” he said.

“I had four fantastic coaches (at the Suns and Demons) and fantastic support staff … all the players I’ve been involved with, being with an aligned club and being able to play with some pretty talented guys on (AFL) senior lists was really special.

“It has been a delight and something I’m always going to be able to look back on pretty fondly.”